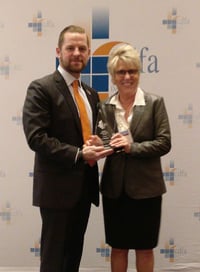 Columbus Ohio – The Council of Development Finance Agencies (CDFA) is proud to announce the recipient of the 2017 CDFA Lifetime Achievement Award. This year’s winner was presented the award during a special ceremony at the 2017 National Development Finance Summit in Atlanta, GA on November 16.

“I am honored and humbled to receive this award,” said Bradley. “CDFA is a wonderful organization. Under Toby Rittner’s leadership, CDFA has grown and become integral to the nation’s economic development initiatives. It has enriched my work – and that of VEDA’s talented and dedicated Staff -- to be able to learn from our peers through the CDFA network.”

Jo Bradley is celebrating her 20th year as Chief Executive Officer of the Vermont Economic Development Authority (VEDA). Her previous professional experience includes the positions of Deputy Secretary at the Vermont Agency of Commerce and Community Development, Commercial Loan Officer at VEDA, and Vice President at Solomon Brothers, Inc. in Boston. Jo graduated with Honors from Johnson State College, earning a B.A., and from the Boston University School of Management with an M.B.A. in Finance. She also completed the Program for Senior Executives in State and Local Government at the John F. Kennedy School of Government at Harvard University. Jo served as the State Government representative on the 2007 National Advisory Committee of the Export-Import Bank of the United States (Ex-Im Bank), and she has served on numerous state and local boards.

Under Bradley’s leadership, total assets at VEDA have grown from $65 million to over $288 million. The Authority has broadened its agricultural mission, and the portfolio now includes a significant energy component, as well. Last year, VEDA approved $198.9 million in project financing.

During Bradley’s management tenure, VEDA has been extremely innovative in creating and adapting its financing programs. In 1997, VEDA moved to a private funding mechanism. At that time, Bradley led the effort to securitize the Authority’s portfolio, thus allowing VEDA to borrow its lending funds in the capital markets. Part of this transaction involved utilizing the State of Vermont’s Moral Obligation to back a portion of the Authority’s debt. This has helped to keep VEDA’s rates low to stimulate economic development activity in Vermont. It has also given the Authority access to the funds it has needed to meet demand.

VEDA has been ambitious in its utilization of federal funding. In 2011, under the State Small Business Credit Initiative, a national economic development grant program to mitigate the effects of the recession, Vermont ranked first in the nation in the number of loans in the loan participation program, and fifth in the nation in terms of its 13.6x leverage of private funding in that participation program.

VEDA is overseen by a Board of Directors of fifteen, five of whom are Ex-Officio members, including the State Treasurer, the Secretary of Commerce and Community Development, Secretary of Agriculture, Food and Markets, Commissioner of Forests, Parks and Recreation, and the Commissioner of the Department of Public Service. Since inception, VEDA has provided over $2.49 billion in financing to Vermont businesses and farms.

CDFA is honored to present Jo Bradley with this prestigious honor as the 2017 CDFA Lifetime Achievement Award winner.

The Council of Development Finance Agencies is a national association dedicated to the advancement of development finance concerns and interests. CDFA is comprised of the nation’s leading and most knowledgeable members of the development finance community representing public, private and non-profit entities alike. For more information about CDFA, visit www.cdfa.net.

The Vermont Economic Development Authority (VEDA) is Vermont’s nonprofit economic development finance lender. Created by the Vermont General Assembly in 1974, VEDA’s mission is “to contribute to the creation and retention of quality jobs in Vermont by providing loans and other financial support to eligible and qualified Vermont industrial, commercial and agricultural enterprises.”

VEDA offers a wide range of low-cost lending options for Vermont businesses and farms of all sizes, and the Authority’s lending solutions are customized to each borrower’s individual needs. Whether in the form of direct loans, tax-exempt bond issuance or loan guarantee support, VEDA’s innovative financing programs help ensure that Vermont businesses and farms have the capital they need to grow and succeed.

VEDA most often lends in conjunction with banks and other financing partners, helping to stimulate economic development activity in Vermont. Since inception, VEDA has provided over $2.49 billion in financing assistance to thousands of eligible Vermont entrepreneurs, manufacturers, small businesses, family farms, and agricultural enterprises. VEDA has five offices throughout Vermont – in Montpelier, Burlington, Middlebury, St. Johnsbury and Brattleboro.

For more information about VEDA, visit www.veda.org or call 802-828-JOBS.