Montpelier, VT – The Vermont Economic Development Authority (VEDA) today announced three changes to its Board of Directors, electing a new Chair, Vice-Chair and Treasurer. Former Chair John Snow of Charlotte stepped down from his role on February 17th.

“VEDA is in great hands with these changes to its Board leadership,” said Jo Bradley, VEDA’s Chief Executive Officer. “Our Board’s depth of experience is an invaluable asset to VEDA, helping us make decisions that improve Vermont’s economic vitality through business financing and job creation.”

“We are all grateful to John Snow for his service on VEDA’s Board and wish him well in his future endeavors,” said Thomas Gallagher, VEDA’s newly elected Chair. “I’m honored to be named Chair and look forward to continuing our work with VEDA’s staff to help Vermont businesses and farms.”

The newly elected VEDA Officers are: 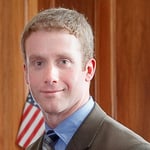 Thomas Gallagher of St. Albans has been elected VEDA’s Chair. Gallagher has been President and CEO of the Peoples Trust Company since 2011. Prior to his appointment, he served as the bank’s Senior Vice President and Senior Commercial Loan Officer and has held various positions within the institution during his 20-year career. Gallagher also continues to participate on his family’s farm, which specializes in dairy and replacement cattle. An Accounting graduate of Champlain College, he serves on various community-oriented boards. He also currently serves on the Vermont Banking Association Government Relations Committee, Vermont Business Roundtable and is a member of the St. Albans Rotary Club.

Mike Tuttle of South Burlington has been elected VEDA’s Vice-Chair. Prior to his retirement in 2016, Tuttle served in various positions over a 25-year career with Merchants Bank and Merchants Bancshares, including the last ten as President, CEO and Director. He currently serves as Director of the Federal Home Loan Bank of Boston and Director of Opportunities Credit Union. Tuttle has also served on various community boards including the United Way of Chittenden County, Flynn Center for the Performing Arts and Vermont Business Roundtable.

Steve Voigt of Norwich has been elected VEDA's Treasurer. Voigt was President and CEO of King Arthur Flour from 1999 to 2014. Voigt is a graduate of the Amos Tuck School of Business Administration at Dartmouth College, and Colgate University. He also serves on the boards of Newport Harbor Corporation, Vermont Mutual Insurance Company, Dansko, and Tuck's Center for Business, Government & Society. He has also been an active member of The ESOP Association serving on the Board of Governors from 2003-2009 and as its Chair.

VEDA offers a wide range of low-cost lending options for Vermont businesses and farms of all sizes, and the Authority’s lending solutions are customized to each borrower’s individual needs. Whether in the form of direct loans, tax-exempt bond issuance or loan guarantee support, VEDA’s innovative financing programs help ensure that Vermont businesses and farms have the capital they need to grow and succeed. VEDA most often lends in conjunction with banks and other financing partners, helping to stimulate economic development activity in Vermont.